JUST ARRIVED ICONS FROM FR. LEO
Watch for new updates... Coming soon!!!
Our venerable and God-bearing father Seraphim of Sarov was a Russian ascetic who lived at the Sarov Monastery in the 18th century, and is considered a wonder-worker. The Church commemorates St. Seraphim on January 2, and the opening of his relics on July 19. He is generally considered the greatest of the 19th-century startsy (elders). Seraphim extended the monasticteachings of contemplation, theoria and self-denial to the layperson. He taught that the purpose of the Christian life was to acquire the Holy Spirit. Perhaps his most popular quotation amongst Orthodox believers is "Acquire a peaceful spirit, and thousands around you will be saved." 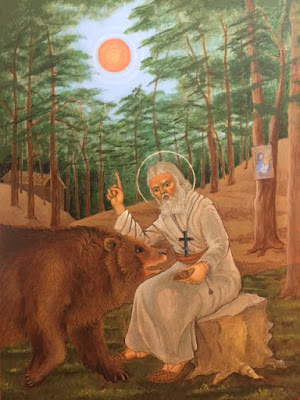 Christ on a White Horse - Revelation 19
11 Now I saw heaven opened, and behold, a white horse. And He who sat on him was called Faithful and True, and in righteousness He judges and makes war. 12 His eyes were like a flame of fire, and on His head were many crowns. He had[a] a name written that no one knew except Himself. 13 He was clothed with a robe dipped in blood, and His name is called The Word of God. 14 And the armies in heaven, clothed in fine linen, white and clean,[b] followed Him on white horses. 15 Now out of His mouth goes a sharp[c] sword, that with it He should strike the nations. And He Himself will rule them with a rod of iron. He Himself treads the winepress of the fierceness and wrath of Almighty God. 16 And He has on His robe and on His thigh a name written:
KING OF KINGS AND LORD OF LORDS.

George the Trophy-bearer
The holy martyr George slaying the dragon in a 15th-century icon from Novgorod, now in the Russian Museum. The holy, glorious and right-victorious Great-martyr and Trophy-bearer George was a Christian Roman soldier killed under Diocletian at the beginning of the fourth century. Though he was born in Cappadocia, his mother was from Palestine, and thus he is a particular favorite of many Palestinian Christians. He is also the patron saint of Moscow, Georgia, and England, amongst other places. The Church commemorates George on April 23, and the translation of his relics on November 3. 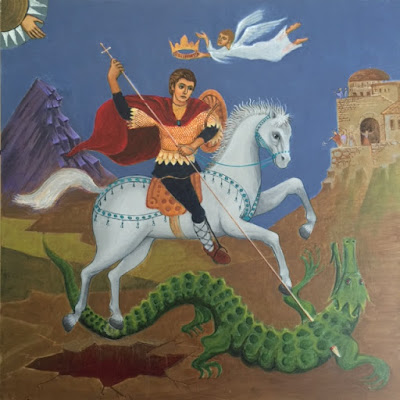 Posted by David Michael at 4:36 PM No comments: 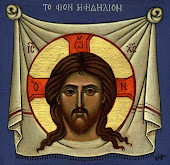